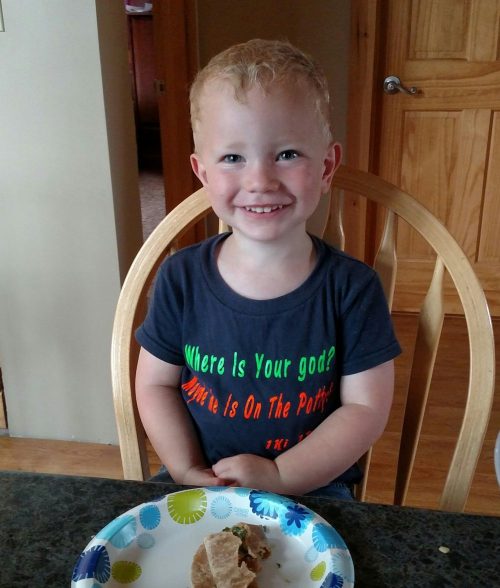 Sometimes my children are exhausting! Don’t worry I am recovered now.

To give a little background we have a rule that you need to finish what is on your plate before you get anything else. If you take it - you eat it. We try very hard not to be wasteful.

Here’s how it all started.

As a parent of young children who are not old enough to fix their own plates, I am very careful to give them small portions to begin with. I made a rice and bean meal. We normally take the rice and beans and make burritos. We have made these countless times and have had no issues with any of the kids eating this…until now!

My 3 year old is not a big fan of beans knowing that I went heavy on the rice and light on the beans. Remember I have done this before with no issues. His dad made a small burrito, and set his plate in front of him. When he checked on him later, he had picked it apart and ate the tortilla but left the rice and beans. His dad and I fussed and fought with him for several hrs to finish it. It was exhausting! He ended up in bed knowing he would have to finish it before getting anything else. However he refused to eat it for a while. We as his parents in our minds knew he was just being stubborn. He had tried every trick in the book to get out of eating it. He told us he was scared, he was full, he just didn’t want it, he cried, and he screamed. Once we finally got him to eat it, his first words after were “ I’m ok!” That took us back…. what does he mean he’s ok? So his dad asked him, turns out for whatever reason he really was scared! I’m not sure what goes through a 3 year olds mind but something, somewhere, somehow got in there and made him scared to eat it.

Here we were as his parents getting more and more angry with him because we thought he was being stubborn, but in reality he wasn’t he was genuinely scared.

What can we learn from this? Here was the father telling his son to do something, and he was scared to do it. What is our Father telling us to do that is scary for us? How long will we resist His instructions? Maybe He is telling us to make a move, weather it’s in our line of work, or our fellowship, or even our home. That can be scary!

I know several times in my walk I have been scared! Starting out I was worried about what people’s reactions were going to be after finding out what I had chosen to do. After telling everyone and living it out in my life I realized     I’M OK too!   Not only am I ok but also I’m better off than I was before! I’m happier; more satisfied and have a peace that I had never known before! Always remember that what the Father asks us to do is for OUR benefit! It’s normal to fear but keep in mind

Joshua 1:9 “Have I not commanded you? Be strong and courageous. Do not be afraid, nor be discouraged, for YHWH your Elohim it with you wherever you go.”